Why don't I remember my ET visits?

But back to why you don't remember. Psychologists spend an inordinate amount of time and energy arguing among themselves about why humans remember and why they don't, but probably most would agree that there are some basic reasons why you may not remember your late night ET rendezvous.

Read more: Why don't I remember my ET visits?

When the idea was first conjectured that aliens were not simply gliding by planet Earth for a look-see, but instead might be performing hands-on experiments on humans; the concept was astounding. No longer were we pondering whether UFOs were "real," and whether the occupants were "real." No, we were way beyond that. We were thrown into a realm of speculation over whether these experiments, that seemed to be of a reproductive nature, were indeed taking place.

From the earliest reports of abductions, we had farmer Antonio Vilas Boas in 1957 claiming he saw an object land in his field, was then dragged onboard and later forced to mate with an alien woman with a pointed chin and catlike eyes. This report was not given wide publicity at the time. Fast-forwarding to 1961, we learned that a New Hampshire couple driving back from a vacation in Montreal was buzzed by a strange craft and ultimately taken up into it. The wife, Betty, was subjected to an intrusive examination, involving a long needle being inserted into her navel which was very painful. The aliens described this as a pregnancy test, similar to a procedure now known as amniocentesis. Meanwhile, her husband Barney endured a strange cup-like device placed over his groin area. The purpose of this procedure was seemingly to extract sperm. Later Barney developed a circle of 21 wart-like growths where the device had made contact with his skin. They were each 3/4 of an inch long and Barney ultimately had them removed.

The UFO Kids: The Myth and the Reality

I’ve mentioned elsewhere that UFOs have presented themselves as a modern, continuing mythological phenomena manufactured to be assimilated relatively painlessly by the common folk.  That myth is created by two factors:  First, the physical factor:  The UFOs are assumed to be of ET origins because they seem to be piloted craft that perform impossible antics in our skies and they seemingly are engaged in activities other than flying around.  Yet they remain unknown in all other salient aspects of their obvious existence.  That predicament for us is entirely contrived, not happenstance.  All we have are suspicions and indications as to who and what they are and their business here.  For decades, they have created, cultivated and sustained this perfect scenario of their own mysterious myth.

Second, for anyone that cares to look at the data and make rational judgments, the governments of the world, and especially my own, the U.S., have made a concentrated effort from the start to prevent people from recognizing the existence and then the intent of the ETs.  It is ludicrous for anyone to think that governments see nothing and know nothing of the UFO phenomena.  Such denials are not done for your protection, peace of mind and well being as much as done for control.  Some level of collusion between the ETs and world governments must be taken into consideration to form the complete, balanced picture.

Read more: The UFO Kids: The Myth and the Reality

The purpose of the hybrids

About nine years ago, the first issue of the Journal of Abduction-Encounter Research (JAR Magazine) was published. It contained three articles on hybrids and on what could be the purpose of their existence. While Helen Littrell shared her experiences with Raechel, an alien-human hybrid who was her daughter’s roommate at college, Budd Hopkins’ and David Jacobs’ articles focused on a hybridization program with an agenda of infiltration, possibly even colonization.

In his article Meeting the Hybrids, published in JAR in February 2016, Miguel Mendonça also talks about the possible purposes of the hybrids. He concludes it is likely that different groups of extraterrestrials are active, with different agendas. One group seems to be dedicated to Service to Self, while another group to Service to Others. Both groups are creating hybrids. The hybrids Jacobs and Hopkins describe belong to the Service to Self category, while the ones Mendonça and Barbara Lamb interviewed for their book mainly belong in the Service to Others category. The Service to Self hybrids appear to have an agenda of social integration and colonization. The Service to Others hybrids "saw their creation, and the intentions of the ETs responsible, as being a fundamentally benevolent enterprise, which seeks to preserve and enhance human life, principally through the expansion of human consciousness."

We asked members of our panel for their views on the matter. Nadine Lalich, Tom Minderle and Helen Littrell sent in their responses:

Read more: The purpose of the hybrids

In 2015 I met ET-human hybrids for the first time—eight of them. Within two months, my reality was expanding so fast that I had to let go of trying to understand it all intellectually. It became clear that this cannot all be understood with the mind. We cannot turn their information on consciousness, love and oneness into personal knowledge without opening our hearts and occasionally letting the mind take a back seat.

That is just one of the key learnings that came out of the research that Barbara Lamb and I undertook for what has become the book Meet the Hybrids – The Lives and Missions of ET Ambassadors on Earth. The hybrids have access to a level of understanding that answers not just the big questions of ufology, but many of the biggest questions that humans have ever thought to ask.

Let that sink in for a moment. Then let the questions flow: how do they know so much? Who are they? What are they? Why are they here?

This brief introduction to hybrids will only scratch the surface of what we uncovered in the research, but it will give the reader a sense of the complexity and multidimensional nature of the subject.

This has major implications for ufology, and indeed the wider enterprise of human inquiry. I will close with some further thoughts on what this suggests for our continuing research in this field.

Book Review of "Priorities for a Planet in Transition"

Title: Priorities for a Planet in Transition. The Space Brothers’ case for Justice and Freedom
Author: Gerard Aartsen
Published by BGA Publications, Amsterdam, The Netherlands, in October 2015.

Every once in a while a book about extraterrestrial contact comes along that is refreshing to read. This is such a book because it exudes so much hope and optimism, in times that surely are challenging. Priorities contains a treasure trove of deep insights and common sense wisdom about how we, as a society, should approach our current situation. The author, along with the visitors that he quotes, encourages us to make the right choices towards the future.

Priorities for a Planet in Transition. The Space Brothers’ case for Justice and Freedom is Gerard Aartsen’s third book. It follows the same main theme as its two predecessors, i.e. that we are being visited by advanced extraterrestrial civilizations who are here to assist us, if we are willing to listen. His books largely rely on the testimonies of the early contactees of the 50's and 60's who had encounters with human-looking beings, whom they referred to as the 'Space Brothers.' Occasionally, Aartsen cites more recent contactees, too, like the Bulgarian space academic Prof. Lachezar Filipov.

Read more: Book Review of "Priorities for a Planet in Transition" 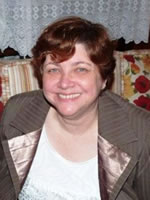 [The interview is in Spanish, with English subtitles. If the subtitles do not appear, please press the CC button].

GP: Good afternoon. We are with Mrs. Monica de Medeiros at the IV UFOZ Conference in Foz de Iguazú, Brazil in 2015. Monica is a well-known person in Brazil. She's a contactee and an author whose books have impressed me quite well. And I'll like to interview her for our magazine.

Monica, what is the role of the contactee, like the voluntary contactees we heard of in the 1950's? Like George Adamski? What role may such a contactee have today?

MDM: They are the ambassadors of a new Earth; of a new human race because their contact is voluntary, sincere and free with the extraterrestrials. And from them they learn to think in a way that which is vaster and more integrated, more respectful of the (animal, plant, mineral) kingdoms existing on Earth, but also more respectful of human beings. Their role is bringing the possibility of making a more amenable and harmonious life, freer from fears.

GP: Monica, and you have also had contact experiences?

A man from the wall (Czech Encounter) 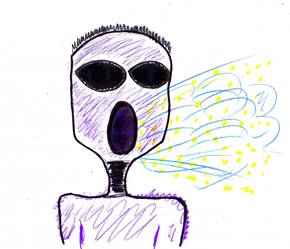 Editor's note: this is another case submitted by Karel Rasin, and described in his book.

It happened about 2 years ago (2010) in her Prague flat. During the night, she woke up and saw something strange coming from the wall just next to the door. It had a grey cloud-like shape and was crawling along the bedroom towards her bed. Then it appeared over her body and was making the same crawling movements. These events repeated several times during the year. With every new visit, the entity became more and more like a figure, like a being. There was a paradox though, physically it wasn't possible to see the door whilst lying in the bed because the furniture blocks the view. Yet she saw the door while lying in the bed! When the being appeared, she would be paralyzed and she found herself in very strange "altered" state of mind and all her senses had been very sharp. The being had the power to move her body, and wherever the being looked, she moved. The man from the wall turned her in the bed to the right, to the left, on her back, on her stomach just by his eyes, and she couldn't do anything about it. When the being appeared, it just stared at her eyes for a long time without doing anything. When the being came next to her bed, it started to talk in a very fast way. His mouth moved rapidly and his mouth looked like it was made from plastic because the rapid talking sort of deformed his mouth. She never understood what he had been talking about, but it reminded her of some codes. This happened many times.

Read more: A man from the wall (Czech Encounter)